What have you been watching lately ? If you like fantasy TV-Series we would like to suggest you to watch these on Netflix.

Leave a comment below and let us know which one you liked most! 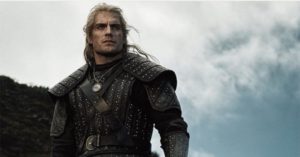 Henry Cavill as a Geralt of Rivia

The show is based on a bestselling fantasy novels written by Andrzej Sapkowski, and takes place in a land known as The Continent where humans, elves, witches, gnomes and monsters battle to survive.

Henry Cavill stars as a Geralt of Rivia, a solitary monster hunter, who struggles to find his place in a world where people often prove more wicked than beasts. When destiny hurtles Geralt toward a powerful witch and a young princess with a dangerous secret, the three must learn to navigate the continent together. Alongside Cavill we find Freya Allan as Ciri and Anya Chalotra as Yennefer.

Nothing can substitute the colossal Game of Thrones, but we can feel comfortable in Henry Cavill’s harms anyway. 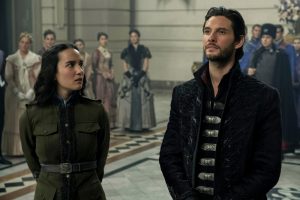 Shadow and Bone is a fantasy series based on two series of books created by American author Leigh Bardugo: a trilogy, the first of which is Shadow and Bone (2012) and a duology that begins with Six of Crows (2015).

The first season of the series follows Alina Starkov (played by Jessie Mei Li), an orphan and former assistant cartographer of the Royal Corps of Surveyors in the First Army, who discovers she is the Sun Summoner, a rare Grisha with the ability to control light.

Grisha are people who can practice the ‘Small Science’ and they live safely in Ravka, whose Second Army is led by the General Kirigan (played by Ben Barnes) aka The Darkling or simply Aleksander. He has spent his life searching for a Grisha who can summon light and destroy the Shadow Fold – a region of impenetrable darkness, created hundreds of years ago – which forced Ravka to be under war fo so long.

Trying to discover who she is, Alina learns how to use her power that can destroy the Fold and save Ravka; on her way she meets the General Kirigan who was looking for her power without knowing who she was. Will they be able to save their world together or will they destroy it ?

All eight episodes of the first season premiered on April 21, 2021, and in June, the series was renewed for a second season! 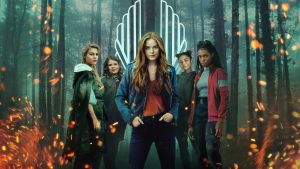 Abigail Cowen as Bloom and her roommates

Fate: the Winx Saga is a teen drama series based on the Nickelodeon animated series Winx Club.

It follows Bloom (played by Abigail Cowen),  a fairy with fire powers, who enrolls at a magical boarding school in the Otherworld called Alfea College.

Which one is your favourite character ?

The six-episode first season debuted on Netflix on 22 January 2021, then in February the series was renewed for a second season.

In the 10-episode series Katherine Langford (famous for her leading role in the teenage drama 13 Reasons Why) plays the main female character: Nimue, the Lady of the Lake. She stars next to Devon Terrell (Barry), Gustaf Skarsgård (Vikings) and Daniel Sharman (Medici: The Magnificent).

One of the key elements of Arthurian mythology is that King Arthur wields a magic sword called Excalibur. Sometimes he pulls it out of a stone, but most of the time Excalibur is given to him by a woman known as the Lady of the Lake, or Nimue.

Netflix‘s fantasy series Cursed, changes up the dynamics of the myth, presenting Nimue as a symbol of courage and rebellion.